Right whales have several distinguishing features that help us to differentiate them from other types of whales. They have a V shaped blow, or spout (which is their visible exhalation), they lack a dorsal fin, and they lift their large black tail as they dive.

Studying right whales in their natural environment is tricky - they are free to roam the North Atlantic and they spend the majority of their time underwater. On the other hand, researchers do have a very useful tool - the ability to tell one whale from the other. With individual whales identified, researchers can follow them through their lives, and learn more about them every year, sighting by sighting. 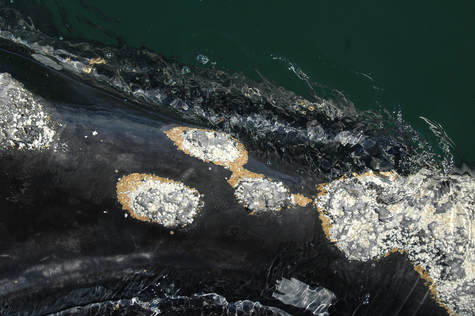 ​Right whales are individually identified by the unique pattern of 'callosities' on their heads. Callosities are roughened patches of skin that appear in many of the places that humans have hair - on the top of the head, on the chin and jaw and above the eyes. The callosities themselves are the same color as the skin (black), but they appear to be white or yellow; this is because living on the callosities are many thousands of tiny crustaceans called cyamids, or 'whale lice'. Their presence helps the callosities show up in the photographs that researchers use to identify individual right whales (along with scars and other unique markings).

For over 30 years, scientists and researchers have been working hard to solve some of the mysteries surrounding the lives of the rare North Atlantic right whale. Individual identification has proven to be one of the best tools available in their quest to better understand the right whale. Each year new photographs are taken and matched to the North Atlantic Right Whale Catalog which is curated at the New England Aquarium in Boston. This Catalog contains more than 73,000 photographed sightings of over 720 right whales, some of which are known to have died. Many groups and individuals have contributed photos to the Catalog going back to 1935.

Each whale is given a number, and sometimes a name. By matching new photos to the Catalog, scientists can continually add to their knowledge about individuals in the population. Photographed sightings from many areas can provide information about where the whales can be found in different seasons, when and where they have calves, and even how long right whales live. 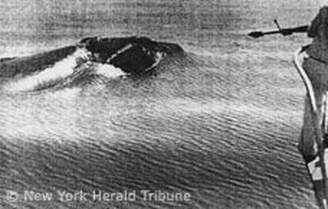 Right whale #1045 is the oldest match in the Catalog thus far. A newspaper reporter first photographed her in 1935 as sport fishermen hunted and killed her calf. Even if this was her first calf, #1045 was probably at least eight years old at the time. She was photographed again in 1959, 1990, 1985 and 1992. The last sighting was in 1995. At that time, the whale was over 60 years old. Her long life probably ended soon after that photo was taken; she had sustained a severe injury (possibly from a ship-strike) and appeared mortally wounded.