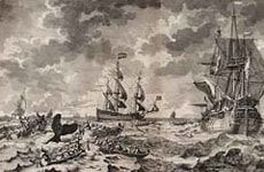 ​A thousand years ago, in the 11th century, the Basques developed whaling techniques that made them the world's first modern whalers. They live in a section of the Pyrenees mountain range that borders the Bay of Biscay where modern-day Spain and France meet. Here the Basques began the industry that would lead to the near extinction of a slow swimming whale they called sardako, which meant "whales living in groups". Later, English-speaking whalers would call this the right whale - the "right" whale to kill, because they were relatively easy to pursue in their inshore habitat and because their thick layer of valuable blubber conveniently kept the dead whale afloat.

​At first Basques hunted right whales that migrated into the Bay of Biscay in the autumn, heading south from their summer habitat in the Norwegian Sea. By the beginning of the 1400s the Basques were searching for whales farther from home, sailing north to Iceland and Greenland. It is likely that the hunters realized they could increase their catches and extend their hunting season by discovering the whales' other seasonal homes and other habitat.
By the mid-1500s, Basque whalers had joined the fleet of European fishing vessels sailing across the North Atlantic to Newfoundland and Labrador. In the Strait of Belle Isle between Newfoundland and Labrador they discovered the familiar right whales and also bowhead whales. For most of the 1500s, harbors like Red Bay, Labrador became summer shore bases for hundreds of whalers who traveled over 3000 miles (4800 km) from their homes every year in search of whales. 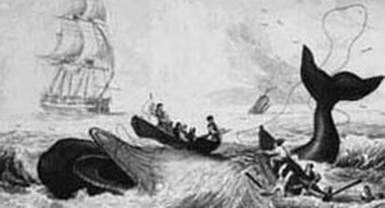 American whalers continued to hunt right whales along the east coast of the United States into the twentieth century until the species became commercially extinct, i.e. too few to hunt. No one knows for sure how many right whales were killed in the North Atlantic before they were finally protected from hunting in 1935, or how many right whales existed before whaling began. Today, the tiny group of less than 500 remaining North Atlantic right whales is closely followed by scientists armed with cameras and other research tools as they fight to save the right whale from extinction.